Ravi Vyas Musings of a Learner

Activation - The Stepchild Metric; I analyzed more than 33K GrowthHackers.com headlines to verify this

When you talk to a lot of Startups or App Publishers and ask them which metrics they focus on, most will mention 2 of them, namely:

Then there are those who focus on Installs & Uninstalls, in both case either a different person is looking at the other important metrics or no one is.

Unfortunately, with Paid acquisitions usually being the second best way to grow (the first one is going viral), the first thing marketers and growth hackers look at is the ROI on the money spent. The question is right, no doubt about it, but it is hard to get your money back when you blindly throw it out of a speeding car hoping to get attention from folks you are passing by. Weird analogies aside, the approach most folks take to figure out their spend on Ad dollars is wrong. They tend to look at just Acquisition & Retention/Uninstall, which are the beginning and the end of the product funnel. Based on this incomplete data, they question why folks are not being retained or uninstall their App.

Marketers & Growth Hackers first need to understand what their product is and what value it provides to the end user. With that, they need to figure out an Activation event: An event which lets you know that the user had or is now on the way to see value in your App, a metric initially created by Dave McClure as a part of his Pirate Metrics. Any metric which is important for onboarding can be an Activation metric. For e.g. most of the common Activation events can be a Signup, completion of onboarding tutorial, providing an email id or push permissions. Then there are specific ones depending on your product. Twitter, for example, can have both following someone or tweeting as an Activation event. Any music streaming app would have playing a song as it’s Activation event. Once you have your Activation metric, see how your marketing campaigns are doing against Activation. It will either filter your junk users or show gaping holes in your onboarding strategy. It is also an early warning mechanism for issues.

Unfortunately, I don’t see most folks tracking it, or looking at it when trying to figure out why their retention is bad. To prove my point, I decided to go through all the headlines of articles on GrowthHackers.com. After analyzing around 33K articles and counting the occurrence of each of the 5 stages of the Pirate Metrics model here is what I found. 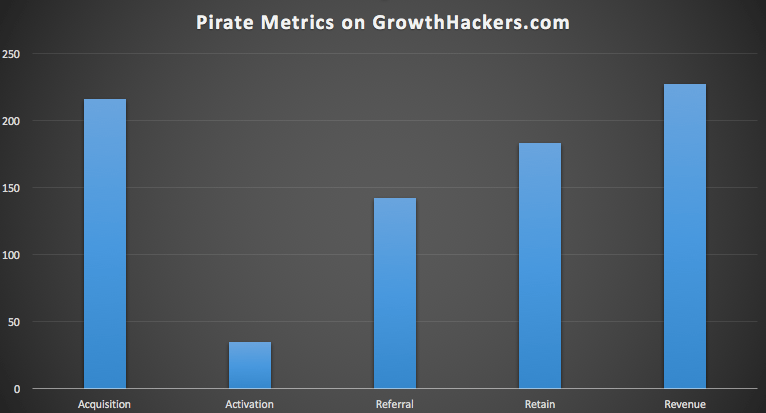 The 5 metrics came up around 800 times, and Activation only 35 times within that. Outside of my personal experiences, I do believe this data goes to show that Activation is a stepchild metric, comparatively little is written about it. One could also conclude most of the “Hacking” going around is rushing to find the returns rather than the value of the investment.

What do you think? Are you tracking an Activation metric? Do share what you are tracking. Open to further questions at @ravivyas84